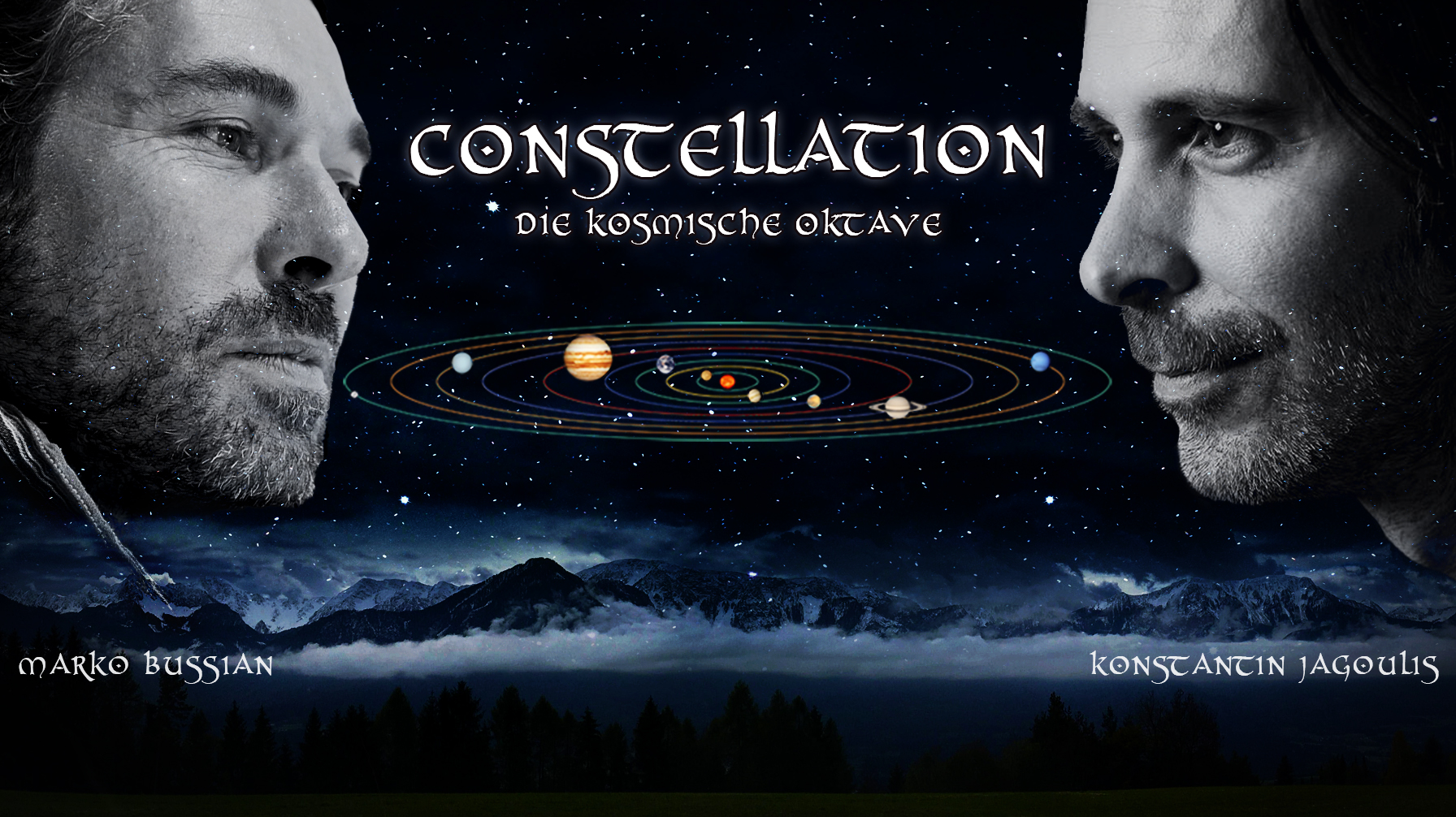 Constellation is a project founded in Ibiza in 2020 by Marko Bussian and Konstantin Jagoulis.

Their music is specially tuned to planetary frequencies, which are based on the calculations of the Swiss mathematician Hans Cousto.
Konstantin plays the first-ever made symphonic planet gongs, which were the first instruments ever to be tuned to the planet tones. These frequencies are translations of orbital times, planet axial rotations, and other periodic rhythms of celestial bodies, like planets, moons, asteroids, stars, and even entire galaxies. Also, elements of the periodic table and entire molecular structures can be translated into sound frequencies, which represent a vast source of natural numbers to create music.
The unique combination of synthesizers tuned to symphonic planet gongs makes each concert an extraordinary sonic experience.
Their music reminds of the 70’s ambient synthesizer music, like Tangerine Dream, Vangelis, or Jean-Michel Jarre.
The Constellation’s music is compatible with a wide range of occasions. Chill-out floors and stages in clubs, at festivals, or sonic meditations, ceremonies and inaugurations are a perfect fit for the ambient live sets. Dance lives sets are also part of their repertoire with uptempo, minimal, and progressive performances.

You can purchase our music on our Bandcamp account: Constellation Music (Bandcamp)

Marko Bussian is a producer, composer, and instrumentalist known for his moody, cross-genre approach to chill-out, pop, and dance. He has been featured on more than 300 releases globally.

Marko is a musician who has been working in various areas of the music business for over 20 years. He made his first steps in the studio as a recording engineer for Gunther Mende (Composer for Céline Dion and Shirley Bassey).
Marko started producing his own music for the indie label Stir15 in Germany and went on to be featured as a producer, composer, performer and recording engineer on over 300 released tracks – including major releases on EMI, Capitol Records, Hed Kandi, Ministry of Sound and Cafe del Mar music.
He has been honoured for his teamwork by winning the German music award ‘Echo’ on three separate occasions and various gold and platinum record awards.
Known for his cross-genre approach at making sonically moody, innovative electronica, chillout & house, Marko first came to prominence after working on Glissando Brothers’ acclaimed album. They were chosen to play a LIVE set at the Sonar Festival in Barcelona back in 2001 on the main stage, with the likes of Frankie Knuckles and Masters at Work.
In 2003 he moved to Ibiza and started his work on a new project called ‘Fous de la Mer’. After more than a decade ‘Fous de la Mer’ has released seven studio albums and various EPs and Singles. Enigmatic and operatic was his adventure in cooperating with Wolfgang Filz, (Sandra, Enigma) and Olivia Safe (Phantom of the Opera) for La.Mia.Bocca. This Project was featured and remixed by Jean Claude Ades and DJ Antoine.
The co-production with Bob Arnz lead him to several number 1 album chart positions with LaFee. A lounge project with Paul van Dyk & Alex Azary is still on the line to be finished.
Remixes for Giorgio Moroder and others complete the view on his broadband capabilities. In 2020 he created a meditation music package called “Healing Frequencies” tuned to solfeggio frequencies. Marko has also performed in major Festivals: e.g. Sonar Barcelona, Christopher Street Day Berlin, Juicy Beats Festival Dortmund, and Ibiza Spirit Festival.

Konstantin Jagoulis, aka Gong Master/Kosma Solarius is a gong master and producer of electronic music. The combination of the highly trained sensitivity and years of live performing experience makes his way of gong playing a unique and deep experience.

His speciality is cosmic octave tuning, a way of tuning music to planetary orbital frequencies, based on the calculations of the Swiss mathematician Hans Cousto.
For over 20 years he is researching the nature of frequencies and became one of the leading experts in the cosmic octave. The natural sounds of planet gongs are touching the audience on a holistic level and they are useful for deep meditations and spiritual experiences. The music feels very cinematic and futuristic and offers a refreshing variety of moods (cosmic, chill-out, space ambient, downbeat, minimal, progressive house, Balearic, lounge, psychedelic rock, jungle beats).
Since 1999 he is producing electronic music and after moving to Thailand, in 2007, performing live was getting into focus.
From 2009 until 2014 he was performing regularly live with the Space Brothers project at the world-famous Half Moon Festival on the tropical island Koh Phangan. He became a gong master in 2012 and started to include the gongs with the electronic live performances at the Half Moon Festival and offering weekly gong meditations with a fast-growing audience.
In 2015 Kosma Solarius started to perform on a global level and brought the gongs to Moscow for the annual Midsummer Night’s Dream. The 2016 Russia tour ended with a highlight concert of gongs and church organ in St. Peter & Paul Cathedral in Moscow ‘Sounds of the Universe’.
The next destination was Ibiza in 2017 where he fully focussed on gong performances and exclusive sessions at private villa events. He was holding weekly public sessions at Atzaró Agroturismo Hotel, taking part in the 2018 Ibiza Light Festival, various Ibiza Spirit Festivals, and his full-moon gong journeys from sunset till midnight near the Es Vedra rock became quickly a big attraction with hundreds of participants. He took also part in some Ethereal events, spiritual ceremonies, and the 77th anniversary of the Las Dalias club.
Due to the COVID situation, he left Ibiza end of 2020 to produce new music together with Marko for the Constellation project in the Alps of Austria. The next destination in 2021 is Greece, where he plans to become a resident and perform with the gongs and the Constellation.